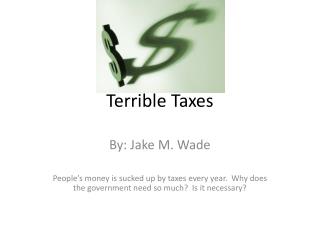 Terrible Taxes. By: Jake M. Wade People’s money is sucked up by taxes every year. Why does the government need so much? Is it necessary?. Terrible Taxes. Terrible Memories - . a digital narrative by holly m. i am otto frank, i was a jewish survivor of world war 2, and these

Taxes - . taxes and your paycheck. payroll taxes based on earnings paid to government by you and employer income taxes

TAXES - . how much of your income will you keep?. payroll taxes. the federal government receives the largest part of its

Taxes - . “in this world nothing can be said to be certain, except death and taxes.” – benjamin franklin taxes are