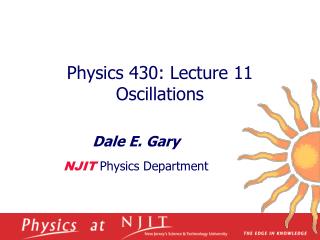 Physics 430: Lecture 11 Oscillations. Dale E. Gary NJIT Physics Department. 5.1 Hooke’s Law. As you know, Hooke’s Law (spring law) gives the force due to a spring, in the form (assuming it is along the x axis): Physics Beyond the SM - . wim de boer, kit. outline. lecture i ( sm+cosmology ) what are the essentials of a grand

Oscillations - . how many initial conditions are required to fully determine the general solution to a 2nd order linear