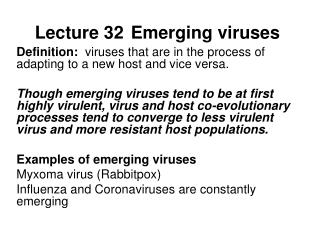 Lecture 32 Emerging viruses. Definition: viruses that are in the process of adapting to a new host and vice versa. Though emerging viruses tend to be at first highly virulent, virus and host co-evolutionary processes tend to converge to less virulent virus and more resistant host populations.

Characterizing and Classifying Viruses, Viroids, and Prions - . chapter 13. comparing the size of a virus, a bacterium,

LECTURE 32 - Glycobiology of animal fertilization # 2 may 23, 2002 v.d. vacquier the use of plant lectins to study

HEV in Belgium : An import infection or an emerging viral zoonosis? - . i.micalessi, i.thomas, b. brochier national