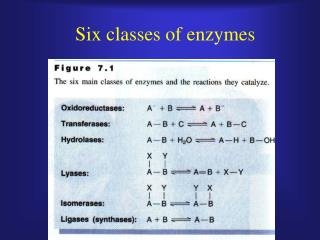 Six classes of enzymes. Factors affecting enzyme activity. Post-transcriptional modification/ Regulatory events pH Temperature Enzyme or Substrate concentration Cofactors. What do enzymes do?. A catalyst is a substance that accelerates a chemical reaction without itself Specificity of Enzymes - . lock n’ key vs. induced fit. lock n’ key. lock and key: suggests that every enzyme has one

Production of Enzymes - . learning objective: to be able to explain why it is more efficient to use isolated enzymes than

APPLICATION OF ENZYMES - . putting enzymes to use – biological catalysts. application of enzymes. bioengineered

Structure of Enzymes: - . all enzymes are tertiary globular proteins, where the protein chain is folded back on itself

HISTORY of Enzymes - . as early as the late 1700s and early 1800s, the digestion of meat by stomach secretions and the

Role of Enzymes - . role of

Nomenclature of Enzymes - . classes on the basis of reaction type and functional groups. for enzyme classes and

Names of Enzymes - . the name of an enzyme usually ends in ­ ase. describes the function of the enzyme. for example,