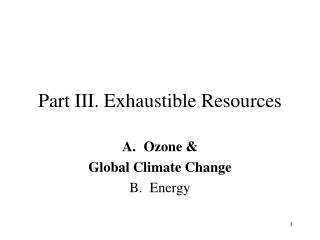 Exhaustible Resource Extraction - . key issues. how are resources being depleted? an economic model of exhaustible

Part III - . this section will provide an overview of the non-vaccine preventable health and safety issues for students:

PART III - . the use of eeg epilepsy periodic patterns other. 1. epilepsy. 1. yield after single seizure 50% (at best)

Part III - . let’s look at some examples. good and bad practice. many web-page designers know about free on-line mt and