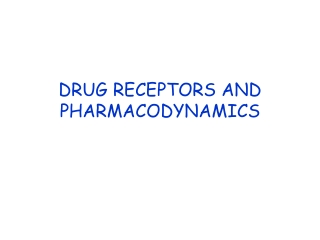 Ocular pharmacology and toxicology - General pharmacological principles. pharmacodynamics . it is the biological and

DRUG RECEPTOR INTERACTION - . lecture 4 pharmacology. drug receptors and pharmacodynamics. the action of a drug on the

Pharmacodynamics and the Dosing of Antibacterials - . william a. craig, md university of wisconsin and wm s. middleton