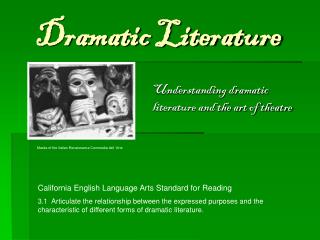 Dramatic Literature - . reading 3.1 articulate the relationship between the expressed purposes and the characteristics

Dramatic Literature - Literary response and analysis 3.1 articulate the relationship between the expressed purpose and

Dramatic terms - . a figure of speech that implies or states a comparison between two unlike things which are similar in

Dramatic Play - . a means children can use to understand or interpret a story or book by acting out the action, either

Dramatic Structure - . please print this slide show, follow the directions, and staple it to your reading response.

Dramatic Poetry - . poetry that uses elements of drama. one or more characters speak to other characters, to themselves,

Dramatic Competitions - . theater of dionysus. role of drama in athens. comedies and tragedies were performed in the

Dramatic Monologue - . using “ s torycorps ” as inspiration. . definition. a poem in which an imagined speaker