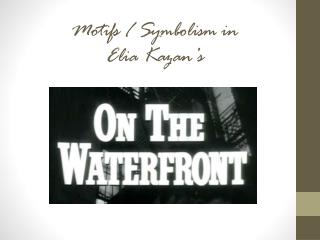 Motifs / Symbolism in Elia Kazan’s. Motifs. (noun) a recurring subject, theme, idea, etc., especially in a literary, artistic, or musical work. a distinctive and recurring form, shape, figure, etc., in a design, as in a painting or on wallpaper. Ad Altare Dei - . chapter 1: sacraments and sacramentals in our daily lives. program goal. as a scout to recognize the

Symbolism in Literature - . what is symbolism?. a symbol is the use of a concrete object to represent an abstract idea.

THE MONITORING OF PRICES IN THE OIL AND OIL PRODUCT MARKETS The case of Portugal, a non-oil producing, small open - Y .

To Kill a Mockingbird - “i’d rather you shot at tin cans in the back yard, but i know you’ll go after birds. shoot

Mosques from all over the world - . click pps series. yeni cami in istanbul - turkey. jamie asr mosque in brunei. kul