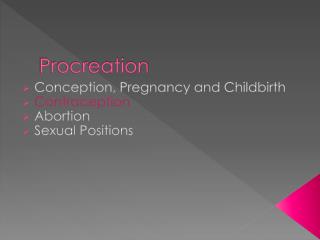 Chapter 11 - . intervention with families. introduction. the family defined: “a family is who they say they are.”

God’s purpose for sexuality - . procreation, love, and justice. we are created …. human male and female gendered

The Spark - . sermon one. what is the purpose of marriage?. procreation pleasure companionship happiness sugar daddy

Natural Law - . is there anything that is steady and secure? answer: god’s order and eternal plan with the universe and

Approaches to Psychology - . different ways of explaining human behavior or why do we do the things we do?.

Aphrodite - . by: lexi collins. history. they say she was sea born the romans referred to her as venus greeks called her

The Sacred Powers of Procreation - Summary of church counsel. we are called to assist god in bringing about the plan of

Family - . concept. family: g roup of people who share a close relationship —a unit typically (or