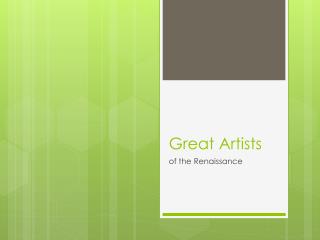 Guides to Great Artists - . a research and publishing project. note to the teacher. this powerpoint presentation, which

Great Artists of music Industry - You can enjoy most famous lil kesh song "shoki" on the internet. it is the

Welcome Artists! - . this lesson is a tutorial through all the material we have covered this year about art cultures and

Textile Artists - . cas holmes. www.casholmes.textilearts.net.  look at her sketchbook for ideas to include in your

Famous Artists - . students will choose a famous artist from the following list. students who choose the same artist will