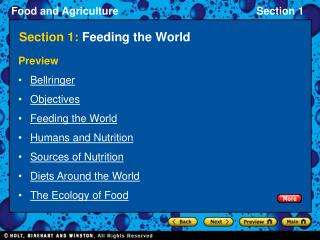 Feeding the World - . a long long time ago…. so what happened. now 21 % of the earth’s land is currently cultivated

World War I Section #1—The Seeds of War - . chris anderson randolph-henry high school. the congress of vienna had

15-1 Feeding the World - . page 379. a. humans and nutrition. 1. famine is widespread starvation which occurs as a result

Feeding the World - . feeding the world. famine is the widespread malnutrition and starvation in an area due to a

Chapter 16: Section 1 The World of Cells - . why are cells important ?. they help us do what we do breakdown food move

FFA: Feeding the World – Starting at Home - . what is ffa?. makes a positive difference in students’ lives by

Chapter 1 The World of Science Section 1 Asking About Life - . before you begin each chapter, i would like you to write