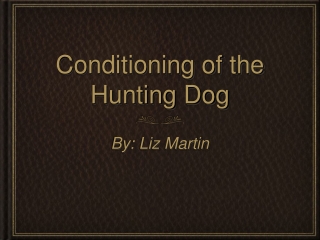 Presentation for AnSci 313 at Iowa State Keeping Track Of Your Hunting Dogs - Dogs were used to accompany the hunter in the field. they are still used for

Morality of Hunting - . by: brittany clarke. background on hunting debate. for many years anti-hunting groups have been

Hunting - . by: brant schwengler. what to wear. you have to wear camouflage. it depends what the whether is. your gun.

Breeds of dogs - Various breeds of

hunting - . by p atrick , jack and aiden . the men hunting. the men did the active hunting like fishing and chasing fast

Hunting - . by jordan. bull elk. this is the worlds biggest elk. an elk this big should deserve the title king of the