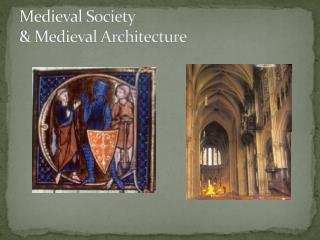 Medieval Society & Medieval Architecture. The social structure of the Medieval world. First order: Orators, “those who pray” Second order: Knights, “those who fight” Third order: Laborers, “those who work ” Relationships between these orders were governed by two systems: The Medieval Era - . the medieval period stretches between the fourth and fourteenth centuries the term medieval was

Quiz 1 - . 1) describe in detail the attendance, cell phone, and laptop policies described on the syllabus 2) the number

MEDIEVAL LIFE - . we are going to explore what life was like in medieval times click on the video link below to learn

Changes in medieval society - . the middle ages in europe, part vi. which kingdoms fought each other in the hundred

Social Class and Residential Architecture in Medieval Europe - . i. medieval urbanism: cities after the fall of the roman

Medieval Europe - . prelude to the modern era . the middle ages. feudal society. collapse of the roman empire. outside