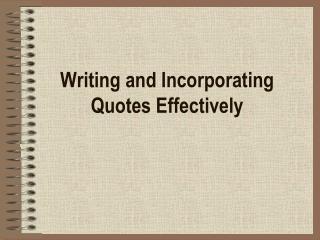 Writing and Incorporating Quotes Effectively. Quoting Is Important. Integrating quotes into your sentences… makes your argument more credible adds to the fluidity of your response shows your command of language demonstrates a higher level of thinking to your readers Incorporating Quotes - . pre-ap english ii. the following excerpt comes from the novella of mice and men by john

Incorporating Quotes - . english 9 ms. marshall. find a relevant quote a quote that relates to the point you are making

Incorporating quotes - . there are two ways to incorporate quotes: using a full quote using an embedded or integrated

“Incorporating Quotes” - . option 1. it is clear that nels gudmundsson is wise when he states , “ it takes a rare

Writing Quotes - Mr. b’s homeroom 2009-2010. writing quotes. on wealth and friendship. when you make a new friend, most

How To Effectively (and Correctly) Use Quotes In Your Writing - . why use quotes?. &quot;quotations&quot; are

Writing Effectively - . overview. how can you make your writing effective and powerful? what is the three-part structure?

Writing Effectively - . ms. carlino’s english class. characteristics of a paragraph. for a paragraph to make sense, you