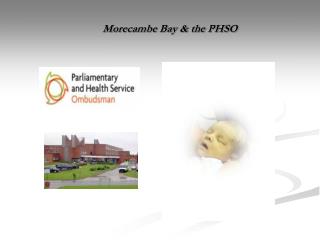 Morecambe Bay & the PHSO. Introduction. In November 2008, baby Joshua Titcombe bled to death following a series of failures in maternity care at Furness General Hospital where he was born. After Joshua’s death: Critical records of Joshua’s care ‘went missing’. InBook - . lisa featherstone, jisc techdis. what is it?. a secure social network for teaching and modelling safe online

References - Improving the diagnosis of delirium and dementia in elderly care patients in a district general hospital.

Breaking the mould forming the role for you - . christiane shrimpton associate specialist in ophthalmology deputy

Morecambe Bay - . by robert rodger. location. in geography we are learning about the coasts around the british isles.