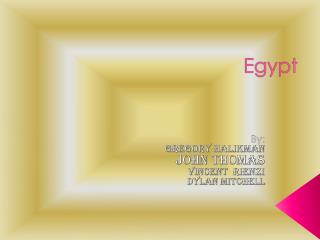 Egypt. By: Gregory Halikman John Thomas Vincent Rienzi Dylan Mitchell. Social Classes. The five social classes of the Egyptian society. The way that this was divided up was into a pyramid. . Pharaohs. Priests, nobles. Traders, artisans, shop keepers, and scribes. Farmers, herders. Egypt - . merip on egypt in year three interview with springborg. link to syllabus. link to wdi. link to um-d library.

Egypt - . the passageway to africa. development of egypt. geological advantage egypt develops along the nile river the

Egypt - . scarab-a beetle that was sacred to the ancient egyptians. cartouche-an oval frame used to surround the

EGYPT - . hale, mattie, and cordes. egypt is in the northern part of africa. on the coast of mediterranean sea. egypt’s

Egypt - I’m a pyramid. egypt. egypt is an amazing 40 to 50 degrees people have go to the river nile to keep cool. river

Egypt - . 5 characteristics of civilization. geography - location. northeast africa along the nile river south of the

Egypt - . “mubarak and the original pyramid scheme” by kunnal vashisht pd.6. location. egypt is located in the map,

Egypt - . a brief history. by the late 19th century, the ottoman empire was in decline. this worried the british who

Egypt - . key terms. nile river- is the longest river in the world, it begins in central africa and runs north through

egypt - . itinerary of a seven day