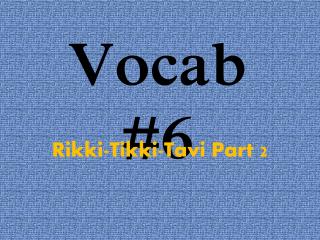 Vocab #6. Rikki-Tikki-Tavi Part 2. I mpotent. Impotent ( adj ). Powerless Teddy felt impotent as he watched Nagaina approach him on th e veranda with the murderous intent clearly seen in her eyes.