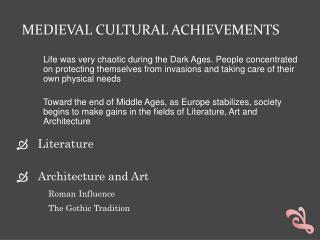 Medieval Cultural Achievements. Life was very chaotic during the Dark Ages. People concentrated on protecting themselves from invasions and taking care of their own physical needs The Cultural Achievements of Sumer - . writing . the sumerians used cuneiform to make trade easier. they wrote not on

History of the Ancient and Medieval World The Glory That was Greece Part 2: Cultural Achievements - . walsingham academy

Legacy Achievements - . some reflections on the igy and parallels for ihy and ipy. roger smith, geophysical institute,

ISLAMIC ACHIEVEMENTS - . essential question : what were the important contributions of muslim scholars during the islamic