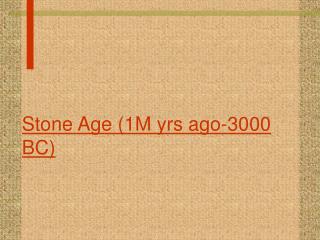 Stone Age (1M yrs ago-3000 BC). From the Stone Age to the Industrial Revolution. STONE AGE EOLITHIC a million years ago to about a hundred thousand years ago a)stone tools b) speech and language PALEOLITHIC up to about 8000 B.C. a) fire making b) pottery Day of the Dead By Kaleena Brown - . history. a festival that was practiced over 3000 yrs ago over 500 yrs ago spaniards

THE GLOBAL HEALTH CRISIS - . w. thomas london, m.d. was there a golden age of human health? life expectancy 10,000 bc to