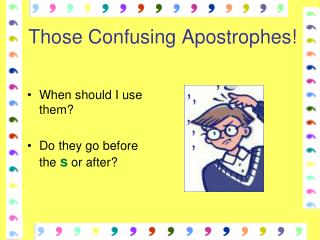 Those Confusing Apostrophes!. ‘. When should I use them? Do they go before the s or after?. ‘. ‘. ‘. ‘. ‘. One way to use an apostrophe is to show ownership. Marvin ’ s face looks sick. the desk of Kathleen or Kathleen ’ s desk the toy of Karen or Karen ’ s toy Adverbs - . all you want to know &amp; then some!. http://amerenglish.tripod.com amerenglish63@yahoo.com. adverbs.

Introduction to Rural Marketing - . why should we do this course? . agriculture’s share in gdp is going down, but,

More Confusing Data from the Hypertension Treatment Clinical Trials Should they influence treatment decisions? - . what

Deadlocks: Part I Prevention and Avoidance - . review: motivation for monitors and condition variables. semaphores are a

Presentation for WLC - . ‘one page management system’ ( opms ). systems tool to aid in goal-setting and problem

Punctuation, Word Choice, and Spelling - . respond to this quotation. &quot;the writer who neglects punctuation, or

Probability and Decision Making - . many problems with decision making can be made less stressful with an understanding

Midterm Review - . goal: focus on concepts, not syntax. exam 1. covers all material so far except: agile and git