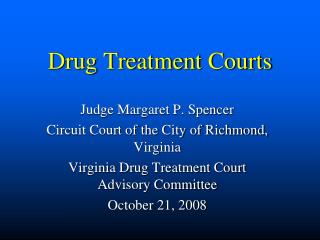 The Drug War: Methods and Stats - U.s. drug war goals. reduce drug use stopping use before it starts" (education and

Drug Courts: Some Answers to Our Burning Questions - . how to do cost-benefit analysis in your adult drug court:

Types of Treatment - . biological treatment. drug therapies: schizophrenia. pre-drug therapy. prior to the discovery of

THE ROLE OF COMMUNITY SUPERVISION IN DRUG AND DWI COURTS - . helen harberts porter93@msn.com. who does community

Drug Treatment Regimens: How and why WHO makes its global recommendations - . prof charles gilks director, co-ordinator