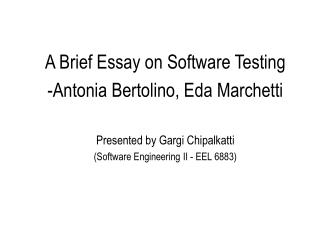 Software Testing - . software testing. what is testing?. many people understand many definitions of testing :. testing is

Software Engineering - . software is instructions(computer programs) that when executed provide desired function and

Introduction to SoftwareTesting - . csc 450. slides adapted from various sources including software engineering: a

Software Development - . int2/higher. software. what is software? all programs that allow hardware to do something useful

Computer software - . software. software - software are programs or instructions that a computer must follow to do its