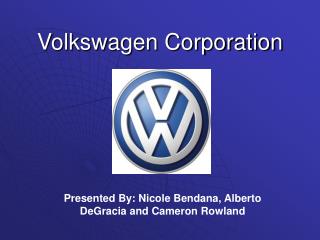 Volkswagen Corporation. Presented By: Nicole Bendana, Alberto DeGracia and Cameron Rowland. How Volkswagen started. Thought process was thought about in 1934 by Ferdinand Porsche. Wanted to create “peoples car” to attract the Germans to this affordable first car. Volkswagen - . by ben williamson. volkswagen started when adolf hitler teamed up with ferdinand porsche to for fill his

Worldwide Volkswagen - . with which of the four requirements does worldwide deal?. proper notice constitutional basis

volkswagen repairs - Http://www.platinumcarservice.com.au/content/vw-service-sydney on the subject of improving,

Volkswagen Egypt - Are you looking for spare parts for your ford car? immediately hop into our website and explore the