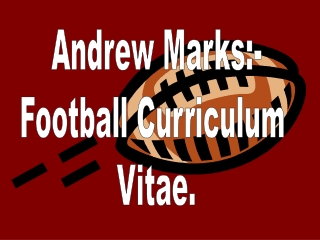 Andrew Marks:- Football Curriculum Vitae. I have a great passion and enthusiasm for Australian Rules Football. I have been involved in the game for all of my life. Curriculum Vitae - . a realistic profile of yourself in your best light. purpose = to get an interview. 3 fundamental

The Pharmacy Curriculum Vitae - . presented by. office of career services, a division of student affairs. please note: it

CV (Curriculum Vitae) - . latin: ’course of life’ a summary of a person’s educational qualifications, skills and

What is the CV ( Curriculum Vitae) for? - A few critical tips for writing your first curriculum vitae by y asemin altas