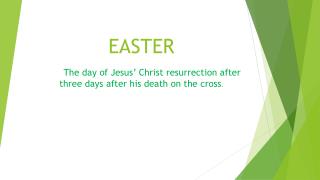 EASTER. The day of Jesus’ Christ resurrection after three days after his death on the cross . Easter - . he is risen. truth, judgment and eternity. ac. 2:22 “men of israel, listen to this: jesus of nazareth was a

Easter ! - . • we celebrate easter in spring in march or in april. • easter is an important religious festival. •

Easter - . easter is celebrated with fervor in  catholic croatia  especially in  dalmatia.  in some ways it is

Easter - . the death and barrel of jesus christ mark 8:31 and he began to teach them that the son of man must suffer many

Easter - By 4kp wcps why do we celebrate easter? we remember that jesus died on the cross. on easter sunday, we remember

EASTER - . did the apostles hunt for easter eggs? what do bunnies and eggs have to do with the death of jesus? has easter

EASTER - . christians belive that jesus was resurrected from dead three days after his crucifixion. religion feast.

Easter - . what is easter. easter is the greatest and oldest holiday in christianity .it is the day of resurrection of

Easter - . by 4kp wcps. why do we celebrate easter?. we remember that jesus died on the cross. on easter sunday, we

Easter - . in the czech republic. easter is one of the most important christian festivals . it celebrates the

Easter - . tomáš bureš 9.b. easter is an important religious festival. at easter time is celebrated the resurrection