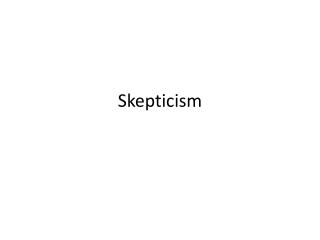 Other Minds - . skepticism. last time we talked about what might be called “global” skepticism– skepticism that

Self-Skepticism - . spencer greenberg. what the tools of science tell us about our thoughts, beliefs and decisions. my

Rationalism of Descartes - Overview. descartes' argument in support of rationalismnotion of innate ideasproblem of

Warm Up Question - . what is skepticism? (define) what is an event or idea that you are skeptical about? define

Science, Matter, and Energy - . chapter 2. what do scientists do?. science is a search for order in nature. why? how?

Article: “A New Generation Expresses its Skepticism and Frustration with Christianity”

Vocabulary Unit 2 Part 2 of Odyssey - . english ib. 1. incredulity. noun the state of being unable or unwilling to