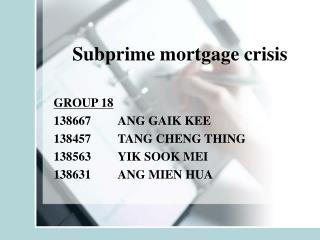 Subprime Crisis - . the banks. leading up to the sub-prime crisis. banks would refuse to lend money to those with bad

SUBPRIME MORTGAGE LOANS - . http://www.youtube.com/watch?v=q8hjuei-nwo&amp;feature=related. what is a subprime

The Role of Mortgage Servicers in the Subprime Mortgage Crisis - . breck robinson university of delaware. mortgage

The Subprime Mortgage Crisis a.k.a. The Great Recession - . the greatest recession powerpoint ever!. what are subprime