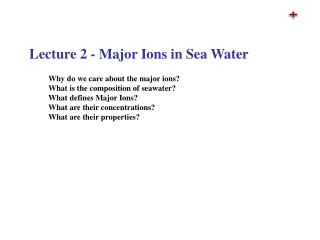 Lecture 2 - Major Ions in Sea Water - . what is the composition of seawater? what defines major ions? what are their

Lecture 2 Water Consumption - . water consumption. the consumption or use of water, also known as water demand, is the

Water Binding to Ions - Chapter 7 activity and the systematic treatment of equilibrium. water binding to ions.

Sea Water Desalination - Ranging from sea water desalination to other kinds of water purification systems, you can

SEA WATER COMPOSITION - . i. salinity: the amount of solid material dissolved in water a. 1. seawater is composed of

#1 Name the ions formed by these elements and classify them as anions or cations - . a. selenium. selenide -2 anion. b.