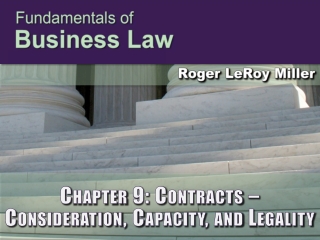 INTRODUCTION TO CONTRACTS - . “contracts are agreements made up of big words and little type.” sam ewing, quoted in

Part 3 – The Law of Contract - . chapter 7 an introduction to the legal relationship. overview. historical development

ES 2.00 UNDERSTAND CONTRACT LAW - . obj. 2.01 understand the elements and characteristics of a contract. elements of a

Chapter 8 Capacity, Legality, and Enforceability - . learning objectives. does a minor have the capacity to enter into an

The Statute of Frauds - . the statute of frauds required that, to be enforceable, the following six types of contracts

Contract Law - . formation and legality class 2. the whole duty of government is to prevent crime and to preserve

Chapter 13 Marriage - . marriage . marriage is a contract—rules of contracts apply minors’ rights to marry are