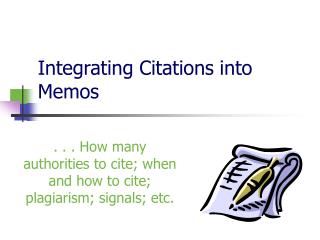 Integrating Citations into Memos. . . . How many authorities to cite; when and how to cite; plagiarism; signals; etc. Why Use Citations?. Lead reader to your sources. Show depth and breath of research. Give attribution. When to Use Citations. In the discussion section

Integrating Quotations - . integrating quotations (and using proper punctuation). you should never have a quotation

Citations - . what are they?. definition: citations contain the information required to locate a source. this is a

Integrating Citations into Memos - . . . . how many authorities to cite; when and how to cite; plagiarism; signals; etc.

Integrating Quotations - . duane theobald dtheobal@westga.edu. do you recognize any of these? what do they mean to you?

In-text citations: Online Sources - . apa format. steps in this tutorial. 1) state goals of this tutorial 2) why we cite

Writing Policy Memos - . for years you have written professionally, but without the tight rubric of the 1000-word policy

Integrating quotations - . tips on how to integrate textual support smoothly into your own writing. what works?.