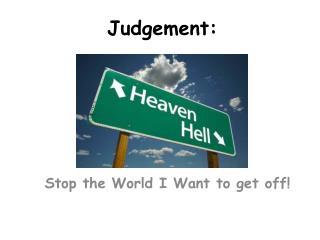 Judgement: . Stop the World I Want to get off!. Question?. What happens when you die?. The 5 people you meet in Heaven:. Who would you like to meet and why?. If Not Now, When If Not Me, Then Who! - . let ’ s agree. we agree!. cell phones off suspend pre-judgement give your “

Pierre Bourdieu , Distinction: A Social Critique of the Judgement of Taste - “there is an economy of cultural goods,

Recap - . images of hell (grim reaper movie). dante, c.s.lewis, etc. nobody wants hell to exist (except for those who

Methodology - . revision. ethical guidelines. informed consent: participants should be briefed with as much information

SOLUTIONS AND SOLVATION - . the straight and narrow path to solution. the day of judgement. for you will be tested on 21

The ARCP - . an overview. a trained arcp panel?. purpose of the arcp. normally at least annually a review and record of