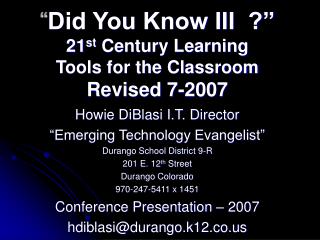 -The Fred Factor - . did you wake up this morning intending to change the world?. leading with vision and passion…. a

A World of Work and Learning in the 21st Century - . steven glyer director education technology and cte newport-mesa

A vision for the future of INPE in the 21st century - . gilberto câmara, director general national institute for space

Certain to Win John Boyd’s Strategy in the 21st Century - . or, any position other than first is a tie for last. chet

e-Learning: Concepts, Usage and Tools - Martin molhanec abstract what is e-learning? concept of e-learning. usage of

Assessment For Learning Tools - Made by mike gershon – mikegershon@hotmail.com. afl is successful when embedded in

Assessment For Learning Tools - Made by mike gershon – mikegershon@hotmail.com. afl is successful when embedded in