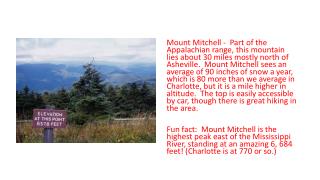 Famous landmarks in the southeast - . nashville , tennessee. the grand ole opry began in 1925 in the wsm radio studios in

A History of Systems of Care &amp;Wraparound: National &amp; RI Perspectives - . this section covers:. the

Report Samples - . stop report. shows where, when and for how long a vehicle has stopped. stop report with map. shows

Assessment of Spreadsheet and Database Skills in the Undergraduate Student - . jeanne baugh department of computer and

What is Evaluation and Why we do it? - . mariana garrettson, mph shrikant i. bangdiwala, phd unc - injury prevention

Air masses and fronts - . 1. an air mass is a wide-spread section of the troposphere with uniform temperature and How to read a hematocrit - . place the bottom of the tube along the red line below the scale. 2. be sure that the place