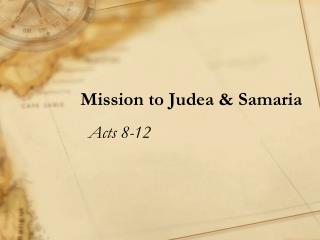 “No Mission to Mission” or - . “the road to mission assignments is lined with good intentions”. how to . . . ask

In Samaria Witnessing In Western Society - . the work of our church in the west. evangelism in the west. our lord jesus

Samaria - Ospel. in. eography. g. samaria. palestine in the days of christ. where are these places ? . 01 mediterranean

Mission to Mars - . death of a watery world. with its next lander , nasa plans to discover what turned mars from a warm,

The witness of the church in Judea and Samaria 18:23 – 21:16 - . the orchestrated power of the progressive witness of

The Holy Spirit comes in Samaria

GOING TO MISSION - . a life changing experience. mission is a process. we go from homeland we go to wonderland we return