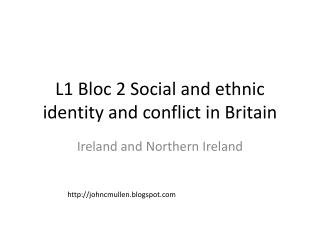 L1 Bloc 2 Social and ethnic identity and conflict in Britain L1 Bloc 2 Social and ethnic identity and conflict in Britain. Ireland and Northern Ireland. http://johncmullen.blogspot.com. Bilingual signs. Riverdance. A statue of Molly Malone in Dublin. Hurling. Oliver Cromwell was Lord Protector of England in the 1640s and 1650s. Drogheda.

L1 Bloc 2 Social and ethnic identity and conflict in Britain

The Black Loyalists - . the american revolution or the war of independence. 1775 to 1783 an armed conflict broke out

Journalism 614: Sociological Approaches: Social conflict and structure - . what are your social norms?. what would spur a

10 PRINCIPLES IN COMMUNICATION THEORY - . from em griffin, 7h ed. 1. motivation. communication is motivated by our basic

An Evolving Model for Conflict Transformation and Peacebuilding in Aceh - . assessing post-helsinki peacebuilding