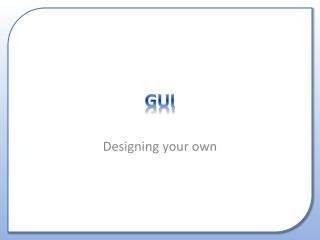 GUI. Designing your own. This presentation covers. Basic GUI design principles Increasing usability. Introduction. GUI have become the favourite interface by many. However, many applications fail to provide a good user interface, especially on the web. GUI - . swing. swing is a widget toolkit for java. it is part of sun microsystems' java foundation classes (jfc) — an