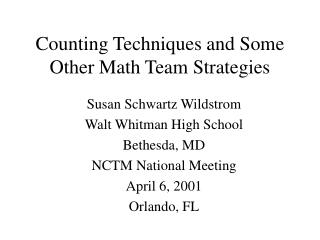 Counting Techniques and Some Other Math Team Strategies Counting Techniques and Some Other Math Team Strategies

Counting - . just how many are there?. introduction to counting methods. 12.1. count elements in a set systematically.

Counting Techniques - . how many ways could…?. the addition principle. there are 9 boys and 8 girls in the student

One, two, three, we’re… - . counting. basic counting principles. counting problems are of the following kind: “ how

How to Make Maths Interesting? - Good math guide gives a customized training so that every researcher comprehends the