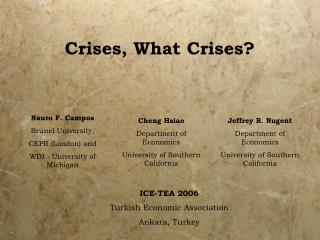 Financial Crises: Can They Be Prevented? - Prof. mohd nazari ismail faculty of business and accounting university of

Chapter Fourteen - . introduction. disruptions to the financial system are surprisingly frequent and widespread.

Introduction to the Course and Main Issues in the Global Economy - . by nouriel roubini stern school of business, nyu

Introduction to the Course and Main Issues in the Global Economy - . by nouriel roubini stern school of business, nyu

William K. Black Associate Professor of Economics and Law University of Missouri – Kansas City - How to prevent the

The Causes of Banking Crises: What Do We Know? - University of crete 4th conference in macroeconomic analysis may 25-28,

Competitiveness and Efficiency of the Banking Sector and Economic Growth in Egypt - Sunil s. poshakwale and binsheng