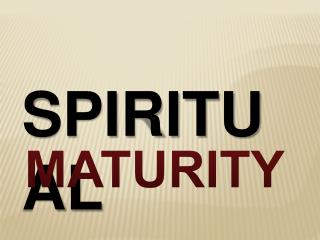 Maturity. Spiritual. What are some characteristics of being spiritually maturity ? What does God call s piritual maturity ? Acts 4:1- 13 Spiritual - . or perhaps better, if you had one, what would it be?. a name that is given (and used) because of some

Spiritual - . growth. born again. it is a cause for even greater rejoicing than physical birth! “his great mercy

spiritual retreat - Nirvana Spiritual Retreat - A bush walk with a twist. enjoy the unique experience only at nirvana

Spiritual Nursing - . definition . spirituality is defined as the experience and expressions of one’s spirit in a

Spiritual Intelligence - . anne storey. agenda. what is spiritual intelligence? is sq important in business? if we

“I’m spiritual, but not religious .” - . “sbnr.org serves the global population of individuals who walk a

Intentional Spiritual Growth: Asking for help through Accountability John 3:19-21 - . this is the verdict: light has come