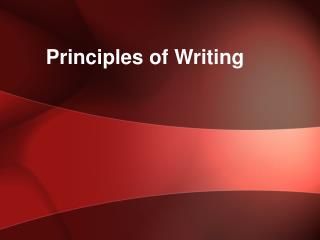 Clinical Writing for Interventional Cardiologists - What you will learn - hopefully!. introductiongeneral principles for

Process of Writing - . process of writing. technical writing is not unplanned it requires proper planning / steps

Principles of Effective Research Writing - . how to write it?. all data should be on hand. organize all data. structure

Writing - . what writing is not. something mysterious done according to a magical formula known only to a few it’s true

Writing in English - . chapter 7. page 135. if students understand the principles of writing in korean, they can easily

Clinical Writing for Interventional Cardiologists - . what you will learn - hopefully!. introduction general principles

Clinical Writing for Interventional Cardiologists - . what you will learn. introduction general principles for clinical