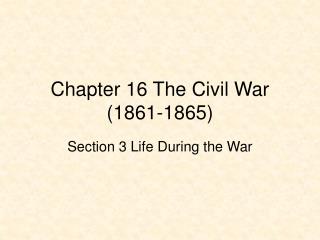 Chapter 16 The Civil War (1861-1865). Section 3 Life During the War. Section 3-Polling Question. A B C D. What change in daily life do you think would be most significantly during wartime? A. Women would enter the workforce in ways they had not done before.