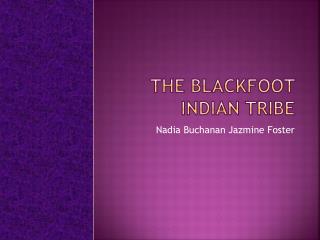 The Blackfoot Indian Tribe. Nadia Buchanan Jazmine Foster . The Blackfoot INDIAN Civilization. These particular Native Americans lived mostly in Montana and Idaho. Some members of the tribe resided in Canada. .

Hupa A California Indian Tribe - . will potter and isaiah lopez. homes. the hupa lived in the coastal mountain ranges.

Wandering into Indian Country - . lessons learned from one tribe april 29, 2014. overview. the wisdom of the tribe

Zuni Tribe - . by: olivia samuelson. meet the zuni’s. keshhi ! that is hello. in this project all your questions about

My Indian Life - . by izzat. journal entry #1. hi my name is bodaway meaning fire maker i am part of the mohawk tribe my

My Indian Life - . cherokee tribe by: antonia reali. the trail of

Mojave Indian Tribe - . by: martin . where did they lived. they lived in s outh western california. they lived south w

Life of the Mohegans - . by: layla singletary. my name is olathe it means beautiful i am in the mohegan tribe my tribe

The trail of Tears - . how did it start?. the trail of tears was a name given by the cherokee tribe that forced their

The Inca Tribe - . by: sivan klapholz. basic tools to live. the inca tribe was not an ordinary tribe;the tribe had a

The Caddo Indian Tribe - . by mahdir muftee rahman. housing. name - it was called a cone shaped hut. materials-it was