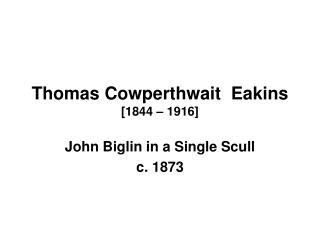 Thomas Cowperthwait Eakins [1844 – 1916]. John Biglin in a Single Scull c. 1873. Thomas Eakins. Thomas Eakins was one of many Americans who invaded Paris during the latter part of the nineteenth century to complete their artistic education. Leviathan - Thomas hobbes thomas hobbes (1588-1769) son of a priest (who had to flee) was educated by a wealthy uncle.

The World Is Flat by Thomas L. Friedman - . destination-india. christopher columbus went to “india” and discovered

How to Read Literature Like a Professor by Thomas C. Foster - . a lively and entertaining guide to reading between the