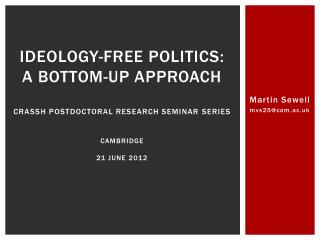 Jennifer Laura Sewell - . caroline sewell. f ast facts. jennifer laura sewell jenny is my aunt on my dad’s side she was

Testimony and the Value of Knowledge Martin Kusch &lt;mphk2@cam.ac.uk&gt; - . a communitarian form of

Tim Croudace tjc39@cam.ac.uk Department of Psychiatry - From data to paper (via stata). newnham college, may 2008. tim

Martin - We are connecticut’s #1 jewelry store located in hamden! we proudly offer the top brands in jewelry to our

Martin - At a time when many classic furniture companies across america have closed shop or sent all production to china,