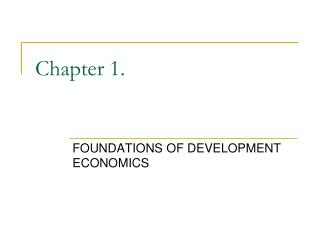 Chapter 1. FOUNDATIONS OF DEVELOPMENT ECONOMICS. 1.1 Welfare Concept. Human Development Index (HDI) of the Un i ted Nat i ons Welfare cannot be measured only by i ncome per cap i ta : Saudi Arabia and Russia are rich because of natural resources but they are not really “developed”