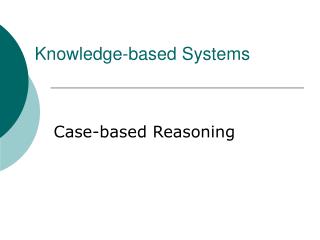 Knowledge-based Systems. Case-based Reasoning. Model-based KBS. KBS are one of the success stories of A I research It has been around 30 years since the first documented KBS and in that time the basic architecture of KBS has changed little Knowledge Based Systems - . expert systems. what does an expert system look like?. a dialog with mycin. the following is

Knowledge-Based Systems - . artificial intelligence. definition: the activity of providing such machines as computers