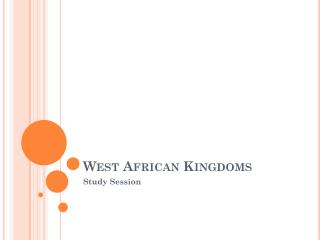 THE DOMAINS OF LIFE - . compare/contrast the “old” system of organizing animals into kingdoms and the new system that

Pre-Class –Read Page 79-80 - . what good was the backbone of the trans-saharan trade? what were the effects of this

West African Societies and Empires - . chapter 5 and 6. human and environmental interactions. depend on the environment