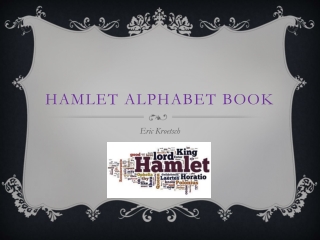 hamlet alphabet book. Eric Kroetsch. Instructions. 2. Compose a Hamlet alphabet book complete with illustrations. Example “A is for the anger that Hamlet feels towards his mother and his uncle Claudius”. A. A is for Avenge Alphabet book - . nicole g ilmore. a-ambassador. ambassador is what all the teachers at ivy june’s school called her

Act Two: “These Tedious Old Fools” Surveillance and Authority in Hamlet - . act one the man in black and the ghost

Aim: What is the meaning of Hamlet’s most famous soliloquy? - . do now: finish up yesterday’s work on hamlet’s 2 nd