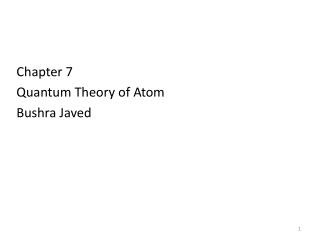 Chapter 7 Quantum Theory of the Atom - . what are the electrons doing in the atom?. why do atoms form ions and

Quantum Mechanical Model of the Atom - . many scientists contributed to the development of the quantum mechanical model

Quantum Mechanics models of an atom - . objectives. to briefly introduce the development of quantum mechanics to give an

Theory of Atom - . atom atom is the smallest part of element john dalton theory 1. each elements consist a small

Chapter 4 - . the bohr model of the atom part 2. quantum leaps. a quantum leap is a change of an electron from one energy

CHAPTER 7 - . quantum theory of the atom. i. rutherford's model of the atom. a) the nucleus is very small - positively