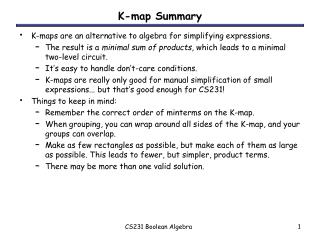 K-map Summary. K-maps are an alternative to algebra for simplifying expressions. The result is a minimal sum of products , which leads to a minimal two-level circuit. It’s easy to handle don’t-care conditions. Measuring Child Outcomes with the Summary of Functional Performance: An Introduction - . kathy hebbeler the early

What is a summary? - . when you summarize , you must present the main points in a clear, concise form. details,

Chapter 15 Summary - . business and information systems planning. questions that the topic of planning raises. how

Writing a Summary of Nonfiction - . essential questions. what is a summary? what makes a good summary? how can i write a

Summary of CALICE Activities and Results - . andy white university of texas at arlington (for the calice collaboration).

Aeneid Summary - . book one, part i. timeframe. starts seven years after the fall of troy. voyage from west sicily to